Welcome to Hetty and Betty 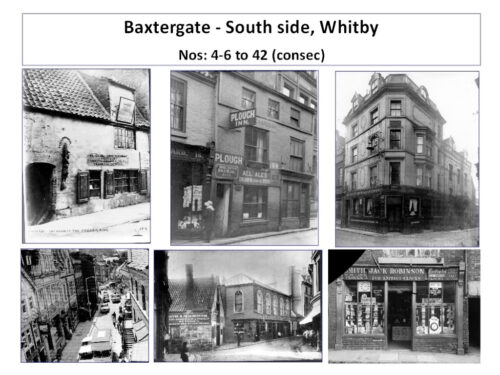 Our story begins on Baxtergate, a long street just yards away from the famous swing bridge, in the very centre of Whitby. Baxtergate faces the harbour and the famous Whitby Abbey.

Baxtergate has always been a bustling place for commercial businesses, and the jet merchants ghost sign can still be seen on the building nearest to the end of the street.

Today Baxtergate is home to independent cafes, shops and services, and is also the banking street for Whitby, with branches of the main banks on it.

The beautiful Grade II building that we call home, isn’t as old as you might think.

In 1891 in the Whitby Times annual review, it is noted that the “old Temperance Hall” was being pulled down. The article states that the Temperance Hall had been built in 1840, after a Mr Chapman’s sail-loft had been demolished. 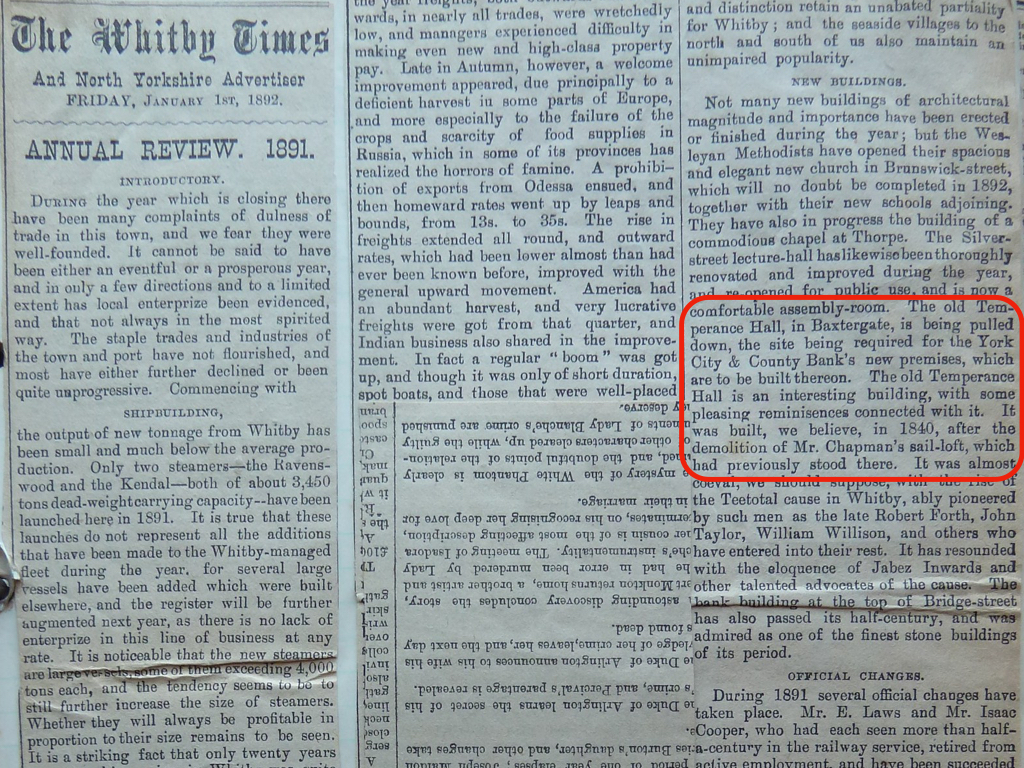 The Whitby Temperance Society was established in 1837. It had a Temperance Hall and other premises on Baxtergate until the site was sold to the York and County Banking Company Ltd (since the site of the Whitby branch of the Midland Bank, later the HSBC Bank). 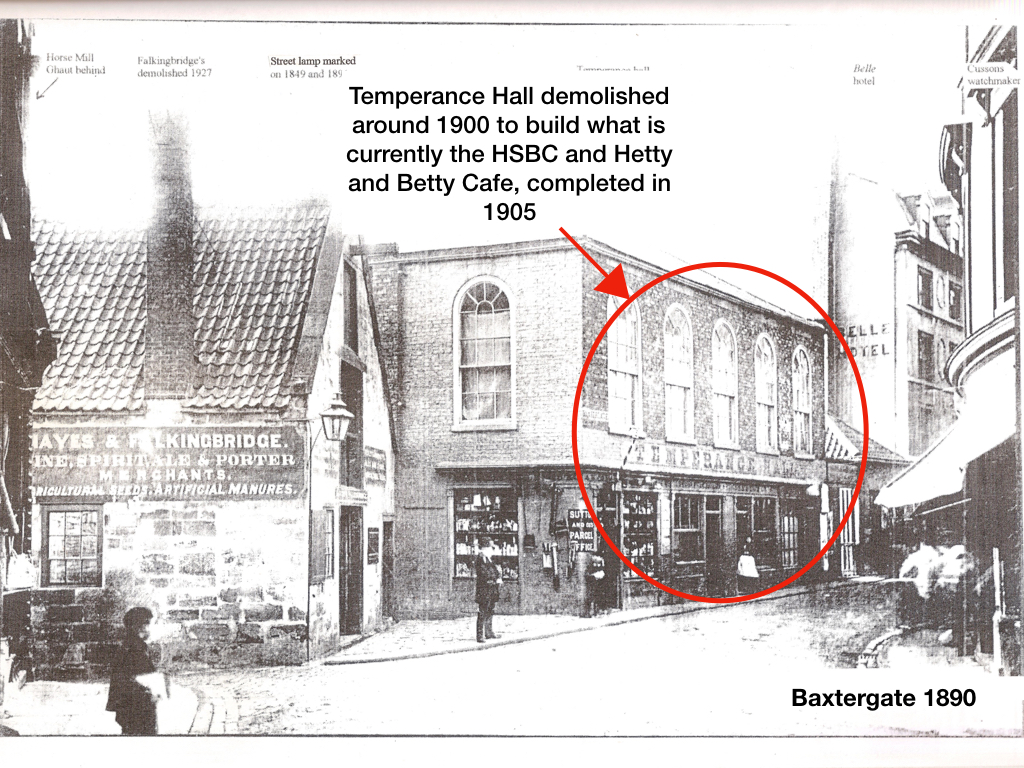 The Midland Bank (now HSBC) finished the work on our building in 1905. The building next door was the Belle Hotel. The cafe entrance shared the alley way that sits between 7 & 8 Baxtergate known as Belle Yard, with the Belle Hotel. 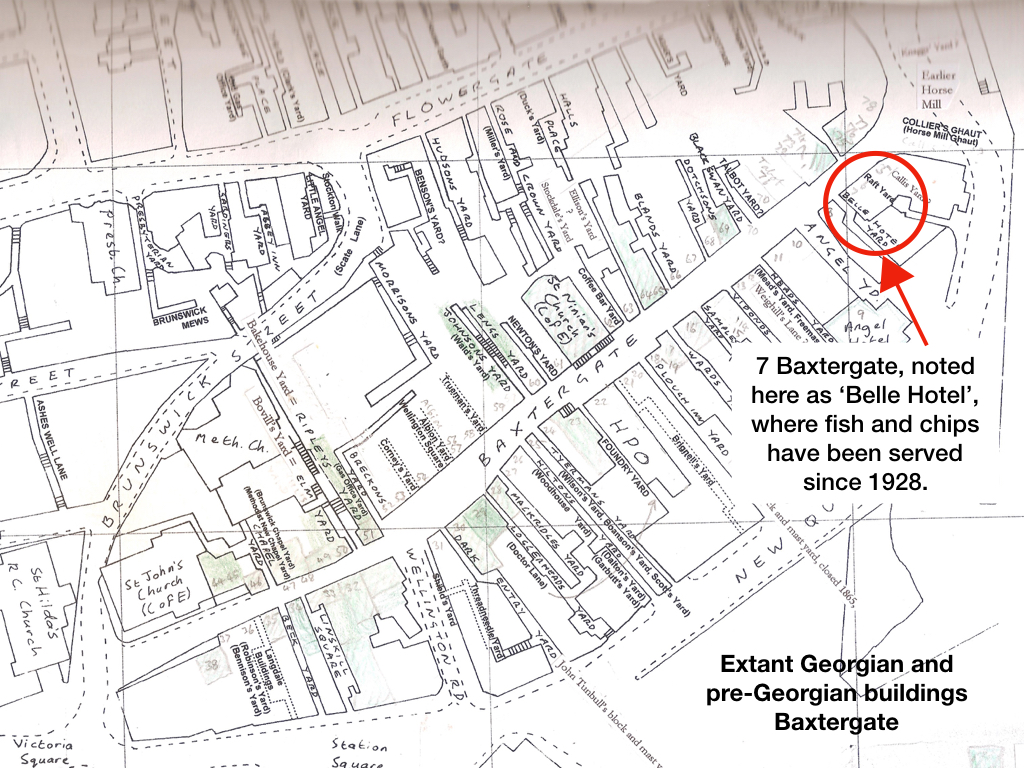 Mill’s Cafe, as it was originally known, was opened in 1928, and served fish and chips. Which makes us the oldest
surviving fish and chips serving cafe in Whitby! 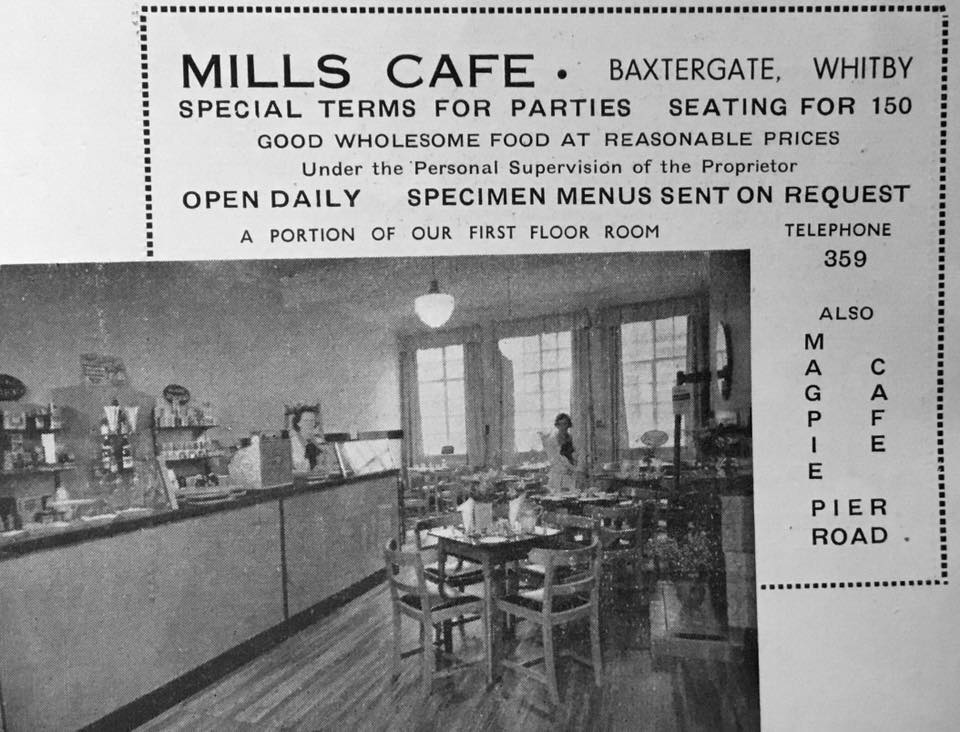 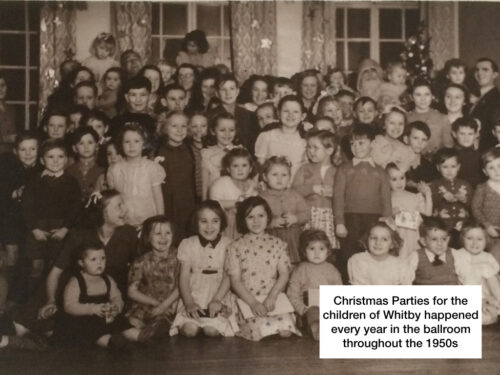 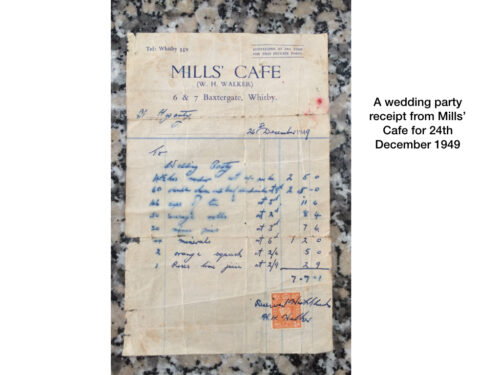 Mill’s Cafe was still thriving during the 1970s and 1980s, and it remained as popular as ever. Locals were employed throughout the summer as the tourists began to visit, and many of our lovely customers today have stories of working here. 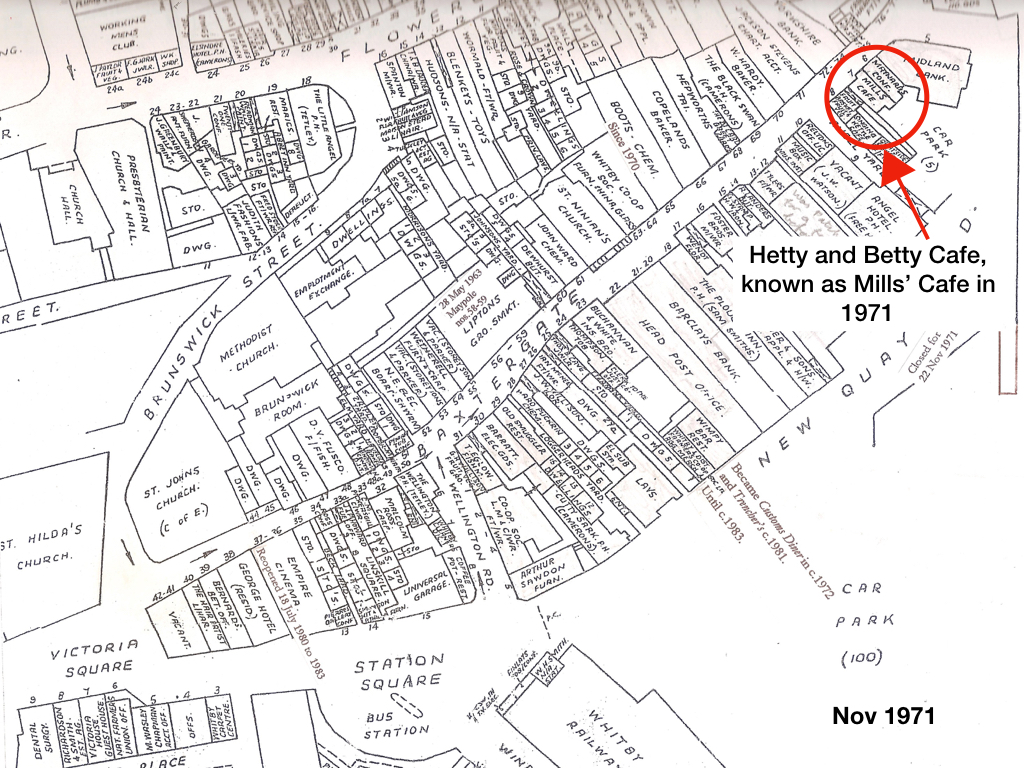 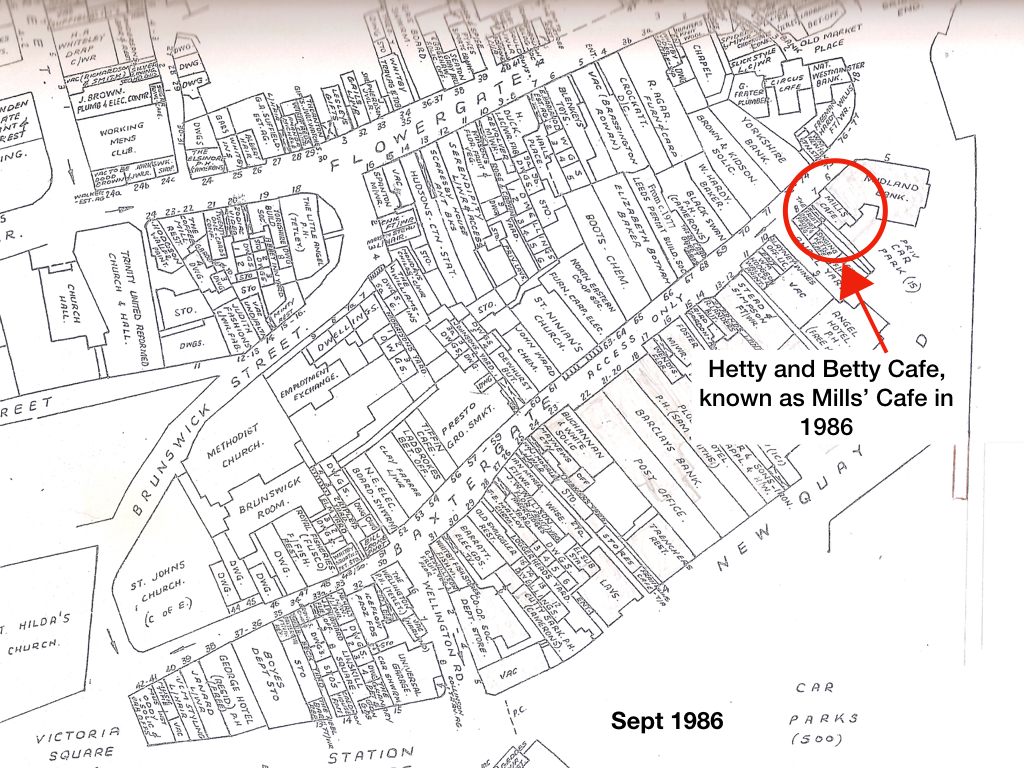 In 2014 the cafe was under new ownership and was renamed Harbour View. Although the cafe had changed hands prior to that, the name wasn’t changed until 2014.

Sadly, the cafe had been in decline for some time. It struggled under new owners, and it was believed a new name change would help, but as Harbour View it was never able to establish itself as the lively bustling cafe it had been as Mill’s of the years before, and our beautiful ballroom became a forgotten about place.

Chains began to move into Whitby, looking to take advantage of the town’s bustling tourist trade, and smaller independents began to feel the pressure. As you can see from the map, many of the independent shops were gone, and chainstores had begun to open. However, the character of Baxtergate was not lost, and it still remains a vibrant, bustling street, with the surviving independents going strong.

As the new owners we were determined to put the cafe, back on the map as the wonderful independent cafe it had been in its former years! We decided it was time to break away from the decline of Harbour View, and create something special once more. A cafe, restaurant and venue that captured the character of Whitby. Friendly, welcoming and comfortable, with a proud history. A place that would be once more at the heart of the community. We decided to change the name, to something more fitting with the history and age of the cafe. We didn’t want to trample over the memories of Mill’s Cafe, and so we went with a completely new name, Hetty & Betty, named after our daughter (aged 3) and niece (aged 6).

We have restored the ballroom to its former glory, ready to welcome events, parties and celebrations once more. And our first wedding reception happened on Christmas Eve, just like all those years ago in 1949!

I do hope you’ve enjoyed the history of our cafe, restaurant and venue, and if you have memories of Mill’s Cafe, please do share them!

I feel a personal responsibility to keep the memories and history of this wonderful cafe alive and well, a custodian of a piece of Whitby’s history.

I hope we will welcome you soon to the cafe, where you can create wonderful memories of your own.

Lois and the team x